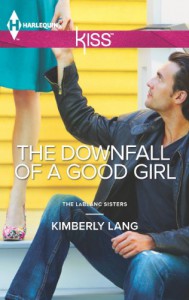 Title: The Downfall of a Good Girl

Blurb: "Why would you decide to seduce me? And why now after all these years?" Southern debutante Vivienne LaBlanc can't believe bad-boy rock star Connor Mansfield is back in town for the New Orleans annual Saints and Sinners pageant. He has a reputation as wicked as his devilish smile, and Vivi has no intention of becoming one of his latest groupies!

He once crushed her high school heart, so playing the saint to Connor's sinner should be easy. But how can Vivi get those less than angelic thoughts out of her head—especially when Connor's so good at tempting her to be bad?

Thoughts: The Downfall of a Good Girl is part of the launch of the new Harlequin KISS line. It represents everything we have come to expect from the harlequin line: a strong story, a charismatic couple, and most of all - a happily ever after ending!

Vivienne LaBlanc (Vivi) is surprised when her childhood nemesis turns out to be our competition in the New Orleans annual Saints and Sinners pageant. Conner Mansfield has taken a break from his rock star lifestyle due to some tendinitis in his hands, as well as a paternity scandal (of which he is found innocent). During their charity work for the pageant, they begin to see each other through new eyes. Vivienne takes her sister Lorelei's advice to break out of her "saint-like" role and "seize the day" by appearing at Connor apartment unexpectedly. She acts totally against her normal behavior, takes a risk, and they enter into a affair. Eventually, the demands of Connor's life intrude, especially when his cynical agent appears in town. But they manage to work things through, and Lang delivers on that "happily ever after" ending!

All in all, it was a very well written story, but I did find it hard to connect with the characters in the beginning. But I think part of that was because there was so much focus on the New Orleans and Mardi Gra angle of the story that I felt like it sort of overshadowed the characters to some degree, especially when they used a lot of terminology you probably wouldn't be familiar with unless you had been in the New Orleans area before during Mardi Gra. However, the more the story progresses the less of an issue it becomes. You'll still find yourself drawn back to the book to find out what happens, and there are more than a few touching scenes that makes you find yourself rooting for them to overcome the obstacles standing in their way.

I look forward to reading Lorelei's story, The Taming of a Wild Child, releasing 2/19/2013!

Read more of our awesome reviews at http://www.thebookreadinggals.com
Tweet